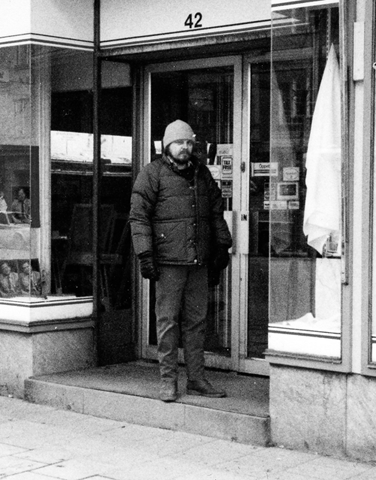 Sweden’s Prime Minister Olof Palme was murdered on the 28th of February 1986. It happened after Olof Palme and his wife Lisbeth Palme had watched the nine o’clock show in Grand Bio on Sveavägen in Stockholm. 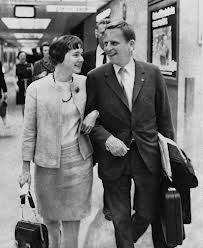 Lisbeth Palme wanted to walk home that night but 360 yards (330 meters) down the street Olof Palme was killed by a gunshot that went straight through his body. It happened at the crossing of Sveavägen and Tunnelgaten at approximately 11:21:30 pm.

The suspect fired another shot that grazed the back of Lisbeth Palme.

The suspect took off on foot by running north via Tunnelgaten towards Regeringsgaten. The police can only speculate where he went from there.

Stockholm’s Police Commissioner Hans Holmér immediately became head of the murder investigation despite he had never led such investigation in the past.

The unit that usually handled murder cases in Sweden was not assigned the case.

Holmér was certain that it was the Kurdish leftwing Worker’s Party PKK who was behind the assassination. This caused almost all resources available to Holmér was looking into the PKK lead.

The investigation was fruitless and after one year he was removed from the case.

For a period of time there was no primary investigator in the murder case of Prime Minister Olof Palme.  Hans Ölvebro became leader of the investigation in October 1987.

The alcoholic and drug-user Carl Gustaf Christer Pettersson (1947-2004) was charged in the murder of Olof Palme under the supervision of Hans Ölvebro.  Christer Petersson was very unfortunate to match the description of a published police drawing of the alleged murderer. It turned out to be a useless sketch since it was later proved to be based on false witness statement.

The police-photo of Anders Björkman.

Lisbeth Palme pointed out Christer Pettersson as the killer in the court despite her first witness testimony after the murder gave an exact description of Anders B, who stood roughly 23 feet (7 meter) from the crime scene.

As a matter of fact she placed him on the exact same spot as Anders B.

The 27th of July 1989, Christer Petterson was sentenced to life in prison by the District Court.

The District Courts two judges wanted to dismiss him as the perpetrator but had to give this sentence based on the jury’s decision.

Pettersson appealed his case to the Higher Court of Sweden.

On the 2nd of November 1989, a unanimous Higher Court dismissed the sentence.

Christer Pettersson was again a free man though his name and reputation was tarnished.

By the end of 1992, the police Commissioner Jan Olsson and the chief psychiatrist of the Swedish police Ulf Åsgård were assigned to profile the perpetrator based on behaviour characteristics.

The profile was discussed with behaviour analyst experts from the FBI and was finished in 1994.

The profiling report identified several instructions as to how to search for relevant clues in the vast crime investigation material that had build up over the years.

The profiling material led to the investigation of roughly 80 persons.

Anders Christer Henning Andersson (1952-2008) was among the suspects that had a motive to kill Olof Palme, the possibility to do so whilst having a licensed Smith & Wesson .357 Magnum revolver that could fire the same ammunition that killed Olof Palme.

There were a total of roughly 650 people that legally had registered such revolvers in Stockholm at the time of the murder.

They were all tested besides the one belonging to Christer Andersson. He said, that he had sold it illegally to a drug dealer. But is that possible?

He has no criminal records, where drugs is involved. He had only one case in the criminal files. He kicked a neighbors dog.

The 7. of July, 2005 Robert Käck L. and three of his friends were on the Subway heading for Stockholm City.

One of Roberts friends was in a very happy mood and throw a piece of crumpled paper away.

It hit Christer Andersson, who went over to them and did hit Robert K. with a clenched fist. He hit him så hard, that his head clashed against the wagonwall. 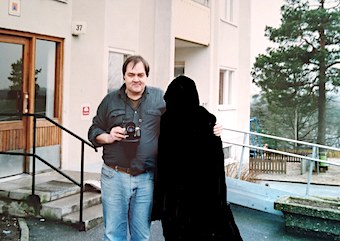 Christer Andersson in 2001. It is the Dutch writer and journalist Marc Pennartz who had got the photo and had darkened the person beside him.

Then Andersson screamed, that they should leave the train and stop harassing him.

They did not understand anything, and Andersson left the train at the next station.

Robert L. was feeling severe pain in his head and his eye in all of December. He took a taxi home from the Central Train Station, because he felt bad and went to the hospital. Later on he saw Christer Andersson and called the police with his mobile telephone.

The Court decided, that Christer Andersson should pay Robert K. 5.000,- Swedish kroner [= 555 US dollars] and the Court gave him a conditional sentence, because he at the time of the crime had a mental disease.