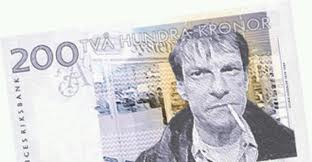 Christer Pettersson ended up as an icon.

The Chilean was angry about the fact that the identikit picture that was released on the 6th of March was described as “southern darker appearance”.

Due to this fact he invented his own story about ‘the shadow’.

The shadow was a tall guy with Northern European looks that he had seen walking behind Palme by the mall called Åhlén, the day before the killing. The identikit picture of the ‘the shadow’ was released on the 24th of March. [1]

The artist admitted this was a made up character three years later however it was unfortunate for Christer Pettersson since he looked like this made up character. When Police Commissioner Arne Irvell on the 12th of April studied the two pages fantasy testimony he added the following notes on the first page with a red marker:

On the second sheet he added following:

“The bayonet-killer. P. is an interesting type when it comes to ‘the shadow’. Psychopath. Priority: 3” [2]

P – Pettersson – was the “right type” and one of the ‘The Usual Suspects’.

He had also been convicted of murder. The weapon at the time was a bayonet. Now all that remained was to gather the evidence against him. This was number one priority: “Pri: 3” 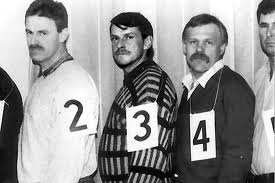 Christer Pettersson – number 3 – thought that he looked like ‘The Shadow’, so he grew a beard.

Not only did Pettersson look like ‘the shadow’ he also looked like the identikit picture. At least Mr. Irvell thought so and so did others.

The truth is the identikit picture had nothing to do with the perpetrator.

Pettersson had similar appearance as two irrelevant pictures. This became his destiny.

Did the bayonet-slaying have any similarity with the murder of Palme?

Not even remotely. In December 1970 at Ulleråkers Hospital, a 23 year old former promising student actor was sentenced to psychiatric care after being convicted of theft and violent behaviour. [3] 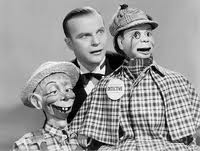 The artist and ventriloquist Curt Randelli.

He escaped and went to Stockholm where he stayed with the artist and ventriloquist Curt Randelli/Curt Ottosson (1907-1974).

Christer Pettersson was out buying Christmas presents in the days leading up to Christmas.

In the crowded street of Kungsgatan he bumped into two random guys who were very drunk after attending a Christmas lunch.

When they passed by each other one of the men – S – pushes Pettersson with his left hand. Pettersson puts down his shopping bags and they start yelling at each other.

Soon after they are fist fighting: The two drunks against a sober Pettersson.

The incident could have ended when Pettersson threw the most aggressive guy – S – into a show window. S however decides to kick Pettersson’s shopping bags.

One of the gifts was Christer’s gift to his 10 year old sister who now was all over the wet sidewalk.  There was also a bayonet among the presents. Christer had bought the bayonet from a drug addict a short while before the incident.

He took the bayonet and chased the men into an alley on Kungsgatan. One of them were killed which made Pettersson flee in panic. He ran around the corner north of Sveavägen and thereafter east of Tunnelgatan heading towards Brunkebergs pedestrian underpass and from there to Randelli’s apartment.

The killed person ‘S’ had an alcohol level of 2.2 per cent.

He was very drunk but Aftonbladet had no mentioning of this the day after.

In the paper it said that a father of two was in town to buy presents for his kids. The rest of the articles can be narrowed down to: “The good innocent father and the evil killer.”

A few days later the remorseful Pettersson was arrested and later convicted of murder and sentenced to forced psychiatric care.

The bayonet killing was an important circumstantial evidence for the police officers that supported the Pettersson thesis:

“He has killed before and can do it again. Even in the same neighbour-hood and almost same escape route!”

But was there any other similarity between the two murders other than the crime scenes were close to each other?

No. Pettersson went berserk when the Christmas gifts incl. the one for his young sister was spread all over the sidewalk.  He killed in a blind rage.

The explanation of such rage can be explained by a brain damage that he had suffered from. His frontal lobe was defect and that meant that he had reduced impulse control cf. Professor in psychiatry Lars Lidberg who examined Pettersson:

“He gets very angry very quickly. I have also seen this rage towards me. He gets extremely intensive and angry in the moment. The violent crimes he had committed haven’t been planned but been caused by impulses. He has a defect frontal lobe and a decreased activity in this area. We know that the frontal lobes stand for control and handling of our future behavioural conduct and that those who are damaged in this area become impulsive, short sighted and loose emotional stimulation.” [4]

The person who killed Palme did not go berserk. He acted cool.

The murderer was following Palme for more than 200 yards (180 m) where after he passed Mr& Mrs Palme while they stopped and looked at Indian scarves at the shop called ‘Sari’.

He carried on discretely and calmly waited for his victim 150 meters further down the street of Sveavägen.

The Granskningskommission (The Commission of Investigation and Scrutiny) also noticed that Christer Pettersson had never used a gun prior to the murder of Palme nor shown any interest hereof. [5] 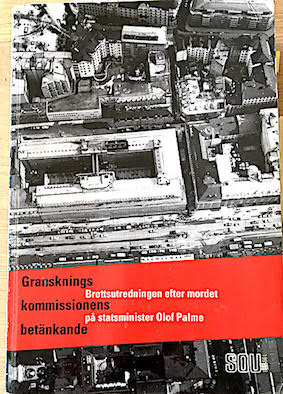 The Commission of Investigation and Scrutiny.

The Commission’s conclusion is in line with one of Christer Pettersson’s contacts in the criminal underworld.

Harri M is one of them and he was asked following in a TV program: [6]

“- Have you committed acts of crime together?

– No we have discussed this but it has always failed since Christer couldn’t plan anything more than one hour ahead of time.”

You can also take a look at the crimes that Pettersson was convicted off in 1986.

Do they resemble any of the plans and actions related to the well orchestrated killing of Palme? 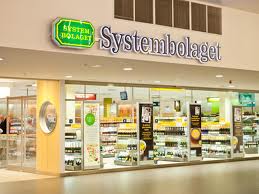 January 2. : Knocks over a cash register at Systembolaget (Place where you buy alcohol in Sweden) in Sollentuna.

January 9. : Hit a non uniformed police officer on the nose during a domestic dispute. He thereafter took a shoehorn from him and threatened him with it.

March 20. : Stole a box of cigarettes off a total value of 111 kroner from a supermarket in Rotebro.

July 31. : Threw a chair towards a window and broke it at the social security office in Rotebro.

August 14. : Broke a window in a corner-store on Skt. Eriksplan in Stockholm and slapped the owner.

September 8. : Broke into an apartment in Sollentuna where he stole a video player.

September 10. : Stole a money order worth 910 kroner (ca $120) at the social security office in Rotebro and thereafter tried to cash it in at the post office. [7]