To my English speaking visitors: Excuse me if there are some language mistakes. Despite my name, I am Danish and was born and raised in Denmark.

In August 2008, there was a man in the southern part of Sweden who was worried about his older brother who lived in Stockholm. The brother was depressed and did not answer his phone for a long period of time. After a while the younger brother called the police in Stockholm in order for them to go and check on his depressed brother.

On the 12th of August two police officers drove to his apartment to check up on him. The older brother lived in a flat on Tornslingan 37 a street in Trångsund that is part of a small county called Huddinge south of Stockholm. Nobody answered the door when the police rang the doorbell. The police did not give up that easily and yelled “Open up! It is the police!” whilst banging on the door. 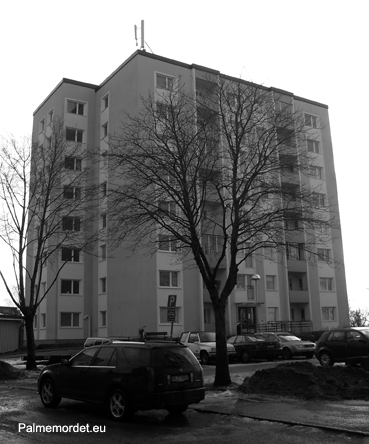 The house where Christer Andersson shot himself when the police knocked at the door.

Why did he kill himself?

Did he kill himself because he believed his younger brother had told the police he was depressed? Most likely not.  A more likely reason was that he thought that the police was going to take him to the police headquarter Kungsholmen for another interrogation regarding the murder of Olof Palme. He was after all the primary suspect and it had happened five times already in 1995 and once in 1998.

The police did not take further action due to the fact that it clearly was a suicide. The body was removed from the apartment on third floor and it was emptied not long time after. The flat on 3rd floor was therefore not inspected by Stockholm’s crime scene investigators before his belongings were removed even though they have plenty reasons to do so. 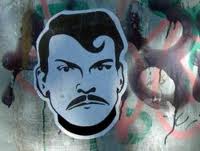 For many years Christer Petersson was the prime suspect: The police haunted the wrong Christer.

For a period of 10 years prior to the suicide Christer Andersson, not to mistake with Christer Petterson, was the prime suspect in the murder of Sweden’s Prime Minister Olof Palme.

Something went wrong when Christer Andersson shot himself. The fact that he was a suspect in killing Olof Palme was only known by a very small group of detectives. It was unlikely that any of the police officers knew about it. His name was sealed as confidential in secret files so no alarm bells were ringing.

The police detectives assigned to the Palme investigation only heard about the suicide after the apartment had been emptied. Unfortunately at this point it was too late to send a CSI unit to Trångsund to look for technical evidence.

Hi Paul, this quote is from your own site:

“He tells Anders Johansson that the reason for him to sell the gun was that he was behind with his rent for several months, gotten reminders and was going to be knocked down. This was the reason why he sold his revolver in the autumn 1992. This makes no sense. Christer Andersson had already moved out of the apartment in Hälsingegatan on the 18th of August 1987. Basically he lived with his parents but Olof and Astrid Andersson hardly ever gave their own son any reminders”

As you can see he sold his gun before August 1987 and certainly not autumn 1992, more likely autumn 1995. The reason why he visited the confectionery, was that he was hoping to see Olof Palme’s murderer, the guy he sold the revolver to. Just like you, he was trying to solve the murder.

Who saw him after the murder with exactly the same revolver (serial number 61575) ? Don’t you think the police would have stopped investigating him if that was the case ?

No, I can’t se that.
I can only see, that he is lying.
At least one member in the Academic Pistol Club had seen him with his gun AFTER Palme was murdered in february 1986.
I had an agrement with this guy and was going to meet him in Stockholm in oktober 2011, but the day before the police said to him, that he was not allowed to talk with me, and he backed out.
Between the lines – but not very well hidden – the police officer Lennart Gustafsson told Aftonbladet 30 years after Palme eas killed, that he had his gun AFTER the killing.
If Andersson had been smart, he would have said, that he had forgotten his gun in an underground train BEFORE the police in the summer of 1989 announced, that ALL Smith & Wesson .357 Magnum should be tested.
Here he made his great mistake.

It does not make sense:
Olof Palme was killed en 1986.
Andersson told the police, that he sold the gun in 1992.
If he did not want to get involved, he would have said, that he sold it BEFORE Palme was killed. Not 6 years AFTER!
But then he had a new problem: The members of his shooting club, Academic Pistol Club. They could remember, when it was the last time, they saw him with the gun, and that was AFTER Palme was killed.